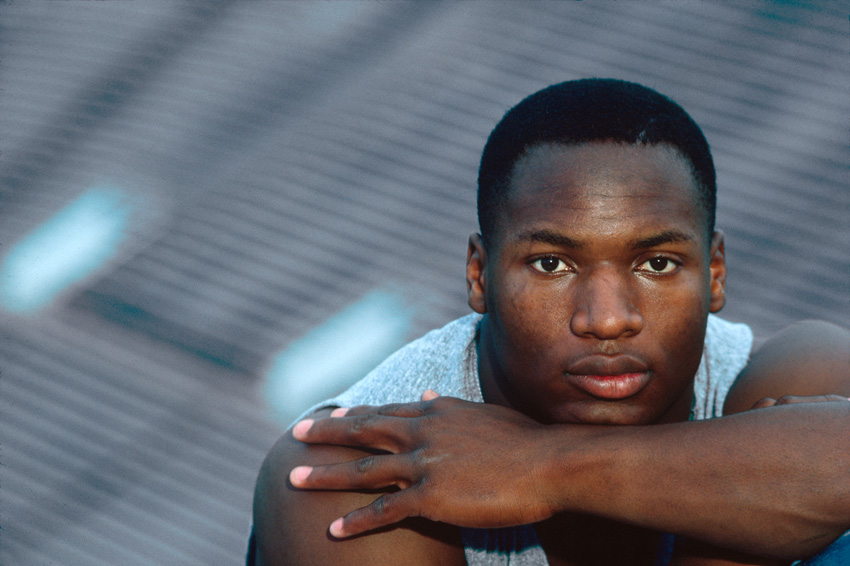 Bo Jackson just turned 50. That’s hard to believe. As a photog, you mark time not just by the calendar, or the ages of your kids, like many folks, but also by assignments done and pictures made. As shooters, we have the good fortune of creating a massive, ongoing scrapbook of our life and times, and getting paid for it. If I didn’t know better, I’d think that had “scam” written all over it.

It’s a noteworthy birthday for Bo, to be sure, and I wish him well. It’s a bit of a marker for me, also. Photographing him was my first big gig for Sports Illustrated. I went to Auburn, and spent a few days with him in the year he won the Heisman. Nice guy. Fun assignment. The thing I really remember from the job was being scared outta my mind. You see, he was quite simply the best athlete I’ve ever been in the same room with. A triple threat in baseball, football and track, his physicality was so extraordinary, that, even when he was just plain walking around, he exuded strikingly supple grace and physical confidence. It was an unspoken announcement that this particular human body was, you know, a Ferrari. Most of the rest of us drive Hondas, Subarus and the like. In my case, it might be a Studebaker. My mandate from the editors was to construct a typical set of feature pictures, from portraits to activities and interactions. One thing they were adamant about was showing his baseball prowess. It was off season, but he was practicing his swing in the batting cage. So, I got into the batting cage with him. Hence the aforementioned fear. I was truly nervous, as he was hitting frozen ropes, and I was inside with him, firing bursts as I ducked behind a net. Couple times I coulda swore he took off a piece of my ear. I kept wondering what they would say at the SI equipment locker when I came back with a 300 f2.8 with a baseball stuck in the barrel. Sadly, quite a number of pictures from this take have disappeared. That’s the way of it, occasionally, when your slides would swim through the maw of a big magazine, get shipped here and there, handled by your agent, and picture people unknown, mostly while you were on the road, doing something else. Slides, like socks, sometimes never made it back into their drawers.

I do have a few chromes left of the effort. Got to make portraits with him doing his trademark move at the time, chewing straws. Went to a grammar school with him, as well. As fierce a competitor as he was on the field, he was equivalently gentle with kids. When we walked into the classroom he turned to me and asked, “Which one do you want me to beat up first?” I pointed to a quaking youth and said something like, “Maybe start with that one.” Nervous giggles resonated throughout the classroom. The kids adored him. It was like photographing a small town mayor. He knew everybody, and was greeted and waived to about ten times per block. We went downtown, and had a po’boy together, and I saw a giant painted Auburn tiger on the wall of a gas station. Drove in, said hi, set up studio lights right by the pump and shot it. His birthday was a marker in another way for me, as well. SI contacted me the other week and told me they were building a special feature about Bo’s fiftieth on SI.com, and could they use my archived picturesâ€”for free? The gentleman doing the arranging for the feature was quite a decent sort, and did his best to explain that the biggest sports magazine in the world had no money to support this article. I was sympathetic. As a lone freelance photographer with a mortgage and kids, I’ve experienced that condition myself, more than once. I demurred.

Time has certainly flown for all of us….more tk…