At least for me. I mean, I’ve used ’em for years, but sparingly, generally opting for the clarity and control of a soft box. Nothing wrong with umbrella light, it works quite well. But, given many situations I get thrown into, control of light often becomes paramount, and the inherent scatter and diffusion of a brolly tends to mean it gets left in the bag. They have good points, to be sure. Light, fast, cheap, collapsible. Cheap is a good thing to note, as they are hardly durable, and thus you find yourself replacing them on at least a semi-regular basis. Take them on the road for a bit, or put them up in a mild breeze, and their longevity drops precipitously.

But I did look around of late, and started to realize how many times I’ve resorted to an umbrella on recent jobs, and how that has coincided with the introduction of the 8 in 1 umbrella model from Lastolite. I had nothing to do with designing it (wish I did)  but the options it presents and the handy packing potential of it made trying it intriguing. And, very rapidly, it has become a light shaper that always goes with us. When using a smallish soft box, which I do a lot, there is certainly clarity and direction to the light. But, at least occasionally, that type of soft box, due to its size, can produce a sharpness of shadow that often has to be managed, i.e., filled a bit, either with a bounce card or another light. What I’ve found (and this is intuitive field stuff going on in my head here, now, not a careful scientific experimentation with comparisons and controls) is that the rounder quality of light coming from the parabola shaped umbrella surface, has more forgiveness and a softer fall from highlight to shadow in the way it plays on the human face.

One of the go to things I’ve embraced about the 8 in 1 is the mode in which you can snuff a great deal of the edges of the shaper with its opaque black cover, and force the light through a small port in the middle, as below. I’m using three small flashes here, mounted on a tri-flash, certainly not for power purposes (the shot this arrangement produced was made at f2) but for the purposes of volume of light. By increasing the size of the light at the source, with a small gaggle of speed lights, you definitely get an incrementally rounder, more voluptuous quality of overall light. This type of an arrangement to me, speaks to one of the strengths of CLS/TTL in that I can rack out to f2 at the camera, and the flashes (presumably) then follow me right there. Can you do this manually? Of course. Can you do it with one speed light? Sure. You just tax the unit a bit more, and there is, I would submit, a crisper edge to that line of demarcation between highlight and shadow. It’s really all up to your work flow, and the look you seek.

You might notice above I’ve got a big black surface pushed into the camera left side of the set. That is to kill blow black from the ass end of the umbrella. Always been an issue with brollies, as, especially in shoot through mode, you lose a lot of light traveling in the other direction. That light can then carom off the walls of the studio like a screaming banshee and fill shadows you don’t want filled. This loss of control can drive you mad. You stand there looking at a flat, filled picture and wonder how the hell it got like that. You stare at the front end of the light, puzzled at its behavior. But that’s like being cop, banging on the front door, warrant and cuffs at the ready, while the perp climbs out the rear window and down the fire escape. The 8 in 1 cures this by providing an opaque which will Velcro to the back end, and cut this notorious spillage, making the umbrella, effectively, a soft box. In that mode, for a situation like this, you would most likely go out of line of sight trigger mode into straight up radio trigger/manual slave operation, because the opaque cover will block line of sight transmission. But, here in the studio, we had access to a 6×6 black out, so we simply used that, and preserved line of sight.

With Deidre in forest, I just let the umbrella play in its entirety, which always produces a predictable, soft, splashy quality of light. Nerissa, my dear, vertically challenged friend, is ably holding a Shur Line paint pole with a Kacey pole adapter affixed. Again, here, I’m using a tri-flash, but more for battery longevity and recycle time than quality of light. We had spare batteries with us, but we were a long walk from the car, so I tried to push the lights as conservatively as possible. I used the same paint pole, shoot through arrangement for the below, but again, corralled the light with the velcro blackout fabric, and made the light source smaller. That way, it has good punch for the model’s dramatically beautiful face, and the light collects up top, near the flow of the dress and her shoulders. It doesn’t spread all over the place. There’s all sorts of new umbrellas out there now, some of which provide a lot of surface (they are damn big) in return for not too much investment, dollar-wise. Lastolite, Westcott and Photek come to mind as providing a variety of these kinds of sizable shapers. Below, quite unreasonably, I am in a swamp with one of them. Another nice option when using an umbrella with multiple speed lights, is that you can click the speed light heads and directionalize them into whatever quadrant of the umbrella you feel you need an extra push of light from. In other words, if you want more light in the lower half of the shaper, then take the right and left flashes and click them so they point downwards, even straight down, so that what actually translates through the fabric of the umbrella is more on the order of the sideways splash of the light, and not the direct, frontal push of it. In short, you can feather these speed lights in multiple directions even before they hit the light shaper. This can produce very small but noticeable changes in the light quality. On the Kelby “One Light, Two Light” tour, I use the 8 in 1 on a regular basis, and quickly go from a reflected umbrella style, using the whole shaper, to closing it down and using just the port in the center, for a shoot through approach that has more character and direction. The fuller, more rounded light of the overall umbrella works for the portrait subject below, who was a lovely lady sitting in the front row. The closed down, punchier approach works perhaps better for a portrait with a bit of an edge. This type of approach also gives you more control over your background, obviously. (There are background lights and a sidelight in the below portraits, as well, but the main shaper is the umbrella in question, the 8 in 1. 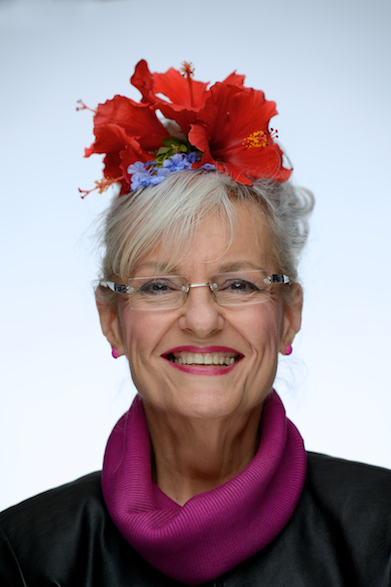 Jeff Snyder, aka, The Big Guy, from Adorama, has been out with me on virtually all of the Kelby Tours, and has seen the rapid way we can move this light around to produce different looks. If you want to ask about specifics, he could be a good reference or source, [email protected]

As the end of the year and the holidays approach, I’m going to periodically drop a blog about things we are currently using, or have found useful. Hard to believe another year is looking for the exit sign. More tk….