Bill Butler was with Josephine Harris and five other members of Ladder 6, inside the North Tower of WTC when it came down. They resolutely stuck with Josephine, refusing to leave her, despite her painfully slow rate of descent. Bill half carried her, cajoling her all the way about seeing her grandchildren again. The building came down, and the miracle of Josephine’s pace put all of them in a fourth floor stairwell that remained intact. Somehow, as the building came down, crushing everything around it, they, and Josephine, survived. While trapped with Harris and his ladder company in Stairwell B, Butler used a cell phone to call emergency numbers but couldn’t get through. As a last effort, he called his home in Orange County, N.Y. His wife, Diane, answered.

“I just said, “Hi, what are you doing?” I was trying to be nonchalant. She said, “Where are you?” I said “We’re at the World Trade Center.” She asked, “Is everything okay?” Then I said, “Well, we have a little problem. We’re trapped in the Trade Center, but we’re okay.” Then she started to cry a little bit, because she knew there was no World Trade Center. At that point I said, “Listen, you can’t cry. I have to give you some information. You have to call the firehouse or call someone and tell them where we’re at.” 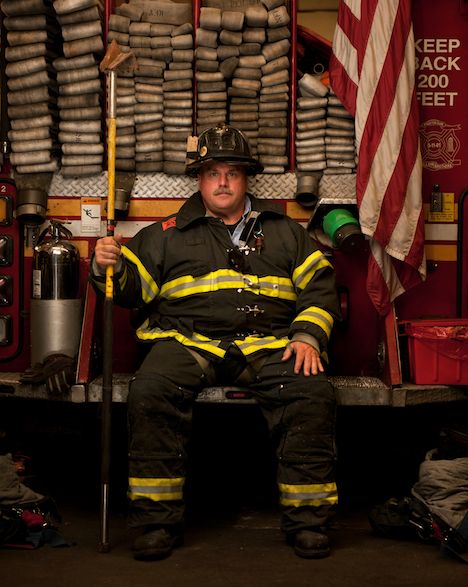 Ten years later, Bill is a lieutentant with FDNY, serving at Ladder 56, Engine 48, up in the Bronx. His memories of the day are still vivid, even with the passing of time. Shot this, along with a video interview with Bill, just last week. The interview, and the portraits open at the Time Warner Center at Columbus Circle, on Aug. 24th.

Exhibition made possible with the generous sponsorship of Nikon USA, Johnson & Johnson, JP Morgan, and friends of the collection.