One of the charges I had when Nikon loaned me out a pre-production Nikon Z 7 was to challenge the camera in as many ways as I could. Surely an alien in a diner I recently blogged about had technical stuff the camera had to crunch on, and at the same time it was definitely a shoot that had some whimsy and fun about it. But, it was also a shoot that was very controlled, tripod bound for the most part, and painstakingly put together over the course of a well pre-produced day.

What would happen in a more fluid situation? How would the camera deal? How would it govern TTL Speedlights? How would focus behave in low light? How would the camera handle truly weird, mixed ambient light? Seeking answers, we headed to New York City, gathering about 11pm in a moho for hair, makeup and styling, and hitting the streets of Chinatown around 3am.

The report card from this pre-production model is excellent. It was hugely helpful to “see” the exposure through the EVF. I am also quickly getting addicted to the “I” button, which transfers a grid of options, all changeable with a thumb click, right to the EVF screen you are seeing through. Also getting used to the pacing of the camera. Shoot a series of pix, then release the shutter button and keep your eye to the camera, and they spin in review right there in the screen. Cursor in, again with a thumb click, and you have confirm on critical sharpness. The EVF is actually Nikkor glass, and so much technology is built into that thing it feels like a heads up display on a fighter jet.

Worked through the sticky August night with a max of two light sources. The above is a new Lastolite source, the Ezybox Pro Strip. It can handle two Speedlights, in this instance, two radio controlled SB-5000 units, and it is a truly beautiful, luminous source. Strips are amongst my favorite style of softboxes, and this one is terrific. It is a huge upgrade from other older, complex, bigger softboxes in that (Thank you designers!) it almost puts itself together. Figure about 3-5 minutes setup time.

Below, two of these strips are at work. Our lovely, subtle and beautiful model is Sara, styled in typically wonderful fashion by Samantha Brown, with makeup by Deborah Englesman. Production as usual, was impeccably wonderful, pulled together by our own Lynn DelMastro. Cali, Andrew Tomasino and I hit the streets and started shooting. The below is the Z series 24-70 f4 lens, wide open at f4, hand-held at 1/15th of a second, ISO 400. Didn’t use a tripod all night. I let the camera crunch on background detail, while I governed the foreground with Speedlights (SB-5000s), which the camera controlled in very precise and predictable fashion. Very happy about that. Quickie BTS shot below. 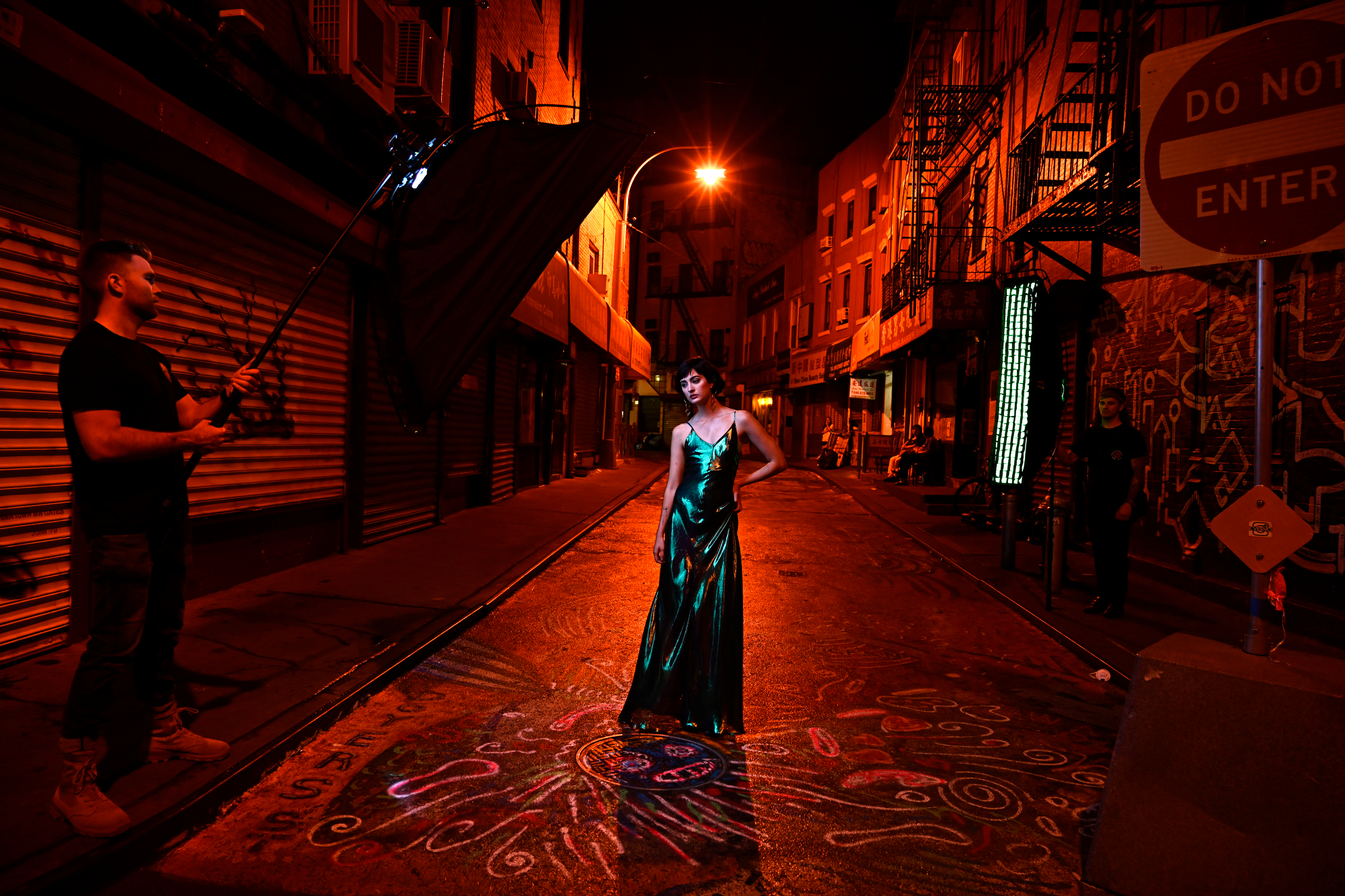 In short, as an intuitive street instrument, the pre-production Z 7 was outstanding, and makes me salivate after the production line models, coming soon. Given the stealthy nature of our assignment, we had to work carefully, choosing our situations away from crowds and people. So, somewhat counterintuitively, we went to Times Square. But I have to say, at 4:30 am at the crossroads of the world, most of the folks out there had consumed so many varieties of intoxicants that they weren’t all that interested in mirrorless cameras.

We shot the below, It was cool being out on the streets of NYC, which I have shot since I moved there in 1976, shooting a Nikon F. with this space age camera. Just wild, and fun.