I’ve been friend of the house since 911. Known as the “Miracle House,” they were among the first responders on that day, but lost no men. Miracle, indeed.

Capt. Jay Jonas (now a chief), and firefighters Matty Komorowski, Mike Meldrum, Billy Butler, Sal D’agostino, and Tommy Falco  were with Josephine Harris, coaxing her down a stairwell, quickly, but not quickly enough, as all 6, who were aware the first tower had already come down, knew quite well.

They didn’t leave her, or each other. Which meant all of them were in the same space when the North Tower came down on them. Somehow, even though the entire landing rotated 360 degrees during the collapse, it stayed intact, and they all lived. Turned out Josephine’s pace of descent was a lifesaver. Those above and below that blessed piece of stairwell didn’t fare well.

If you want to read an interview account of that day, and those stairs, hit this link. Stone Phillips did a good job, letting the guys just talk about what happened in there, minute by minute. They took a leap of faith and came to the Giant Polaroid camera, and are included in the book Faces of Ground Zero. Since then, the  house and I have stayed in touch. They’re good people. And they handle a lot of stuff. Fighting fires in Chinatown has unique difficulties. It’s a warren of aging buildings jammed together in one of NY’s oldest and most charismatic neighborhoods, and, as one might imagine, not too much corresponds to building codes and blueprints. Surprise walls, mysterious, makeshift staircases, overloaded circuits, boilers that might have been built in the days of steamships–all this can present in the middle of the night, in the middle of a fire.

There’s been some big fires of late, lots of activity, and a bunch of the guys got medals, which was an occasion to have the whole house come together. Medal day. So, picture day. Call Joe.

I’ve done it before, a few years ago, in a rainstorm. I tell ya, if you gotta do a group shot in pelting rain, make sure it’s a bunch of firefighters. All smiles, not a word of complaint, everybody looking at the camera.

Last week, it was sunny, which was a different photographic problem, for sure. Did it all small flash, eight total, six on high stands. Three camera right, three camera left, master hot shoe unit doubling as a flash, and one up top on high boom, for good measure. 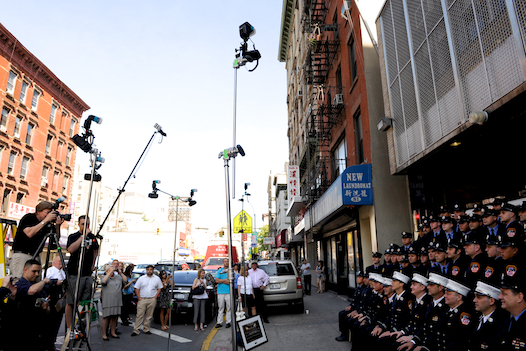 Now, you don’t see this type of light in the ads in Vanity Fair. Lush, it ain’t. But effective, yes. This shot isn’t about the light, or the shooter, or the numbers of pixels. This is about recognition, about every guy here going home and saying to his wife, girlfriend or kids, “There, see, there I am.” Not a time for subtlety, just a time to bring the light, and make sure everybody sees it. Speaking of pixels, I shot it D3X, going to ISO 400. If I had to go higher, would have switched out to D3S, which handles higher ISO’s well. Had three groups going, all wireless, all manual. Yep, no time to mess with the TTL squirrels on this one. Sent them all a signal to go manual, ½ power and then tapered it to ¼. Which is the reason for multiple lights. Coulda done it with fewer, but would have taxed them pretty hard, and, it being an active house that could have gotten a call at any moment, I didn’t want to wait on recycle. Shot about 25 frames, and we were done. Told all the guys they had to see the camera with both eyes. You forget sometimes, you know, ’cause when you can see the camera you think it’s all cool. But you might be seeing it with just one eye, and that means the other half of your face ain’t in the picture. So I had the guys do the blink thing, back and forth, so I knew I had everybody’s eyeballs. Also got the lights way high. Reason being, you want to fly the flash literally over the front rows to the back rows. Light from eye level the gang up front gets nuked before you can get anything to guys in the way back. So get the lights high up, and the downward spill will take care of the front rows.

Group shots are tough, right? Don’t know a single shooter who really likes to do them. About 1000 ways to screw it up, and only one or two to do it “right.” But it’s cool stuff, ’cause these are some of the most important pictures of life. This is the stuff of memory. These get passed on. These hang on walls.

Maybe, someday, when my pixels have long since turned to dust, one of the young guys in this picture, somebody with a girlfriend now, will return to the house with his grandchildren. He can point to this shot, hanging on the wall, and say, “That was me, a long time ago.” And they’ll look, and he’ll be there, face filled with light, looking at the camera with both eyes.

Keith Johnson (seated, 2nd from right) is a good guy, and the walking, talking definition of the word “gregarious.” He called out to me at camera and told me to make sure I made him look good. Told him no problem, I had a sub-menu of custom functions buried deep in my X that I’ve come to call the “Keith Johnson Function.” Just makes everybody look good. I’m thinking about talking to Nikon about it. More tk….