Summertime, officially. Right here in NYC. This time of year comes round, and I love going to Manhattan again, enjoying the late light, and the kinda clear skies of May. It’s still cool enough, and the heat of August hasn’t risen up and shrink wrapped the city in a dirty brown, clinging smog.

It was about this time of year I shot this….. 105 stories up on the Empire State Building, the true grand dame of all buildings. Not the biggest, just the most storied. I have always loved climbing around up there. I’ve got this little niche…hell, it’s not even a niche, it’s more like an on again, off again hobby, kind of like a vacation type scuba diver who only goes in when the water is clear and warm. That morning, on assignment for the book America 24/7, I worked once again with my friend Tom Silliman, an engineer and fearless builder and climber of antennas. One SB80 by the way. My assistant at the time, a terrific shooter named  Alicia Hansen, had to bury the flash in her, well, under her, uh, chest, and shield it from all the other transmissions up there, cause they were driving the flash nuts. I had met Tom shooting this…. 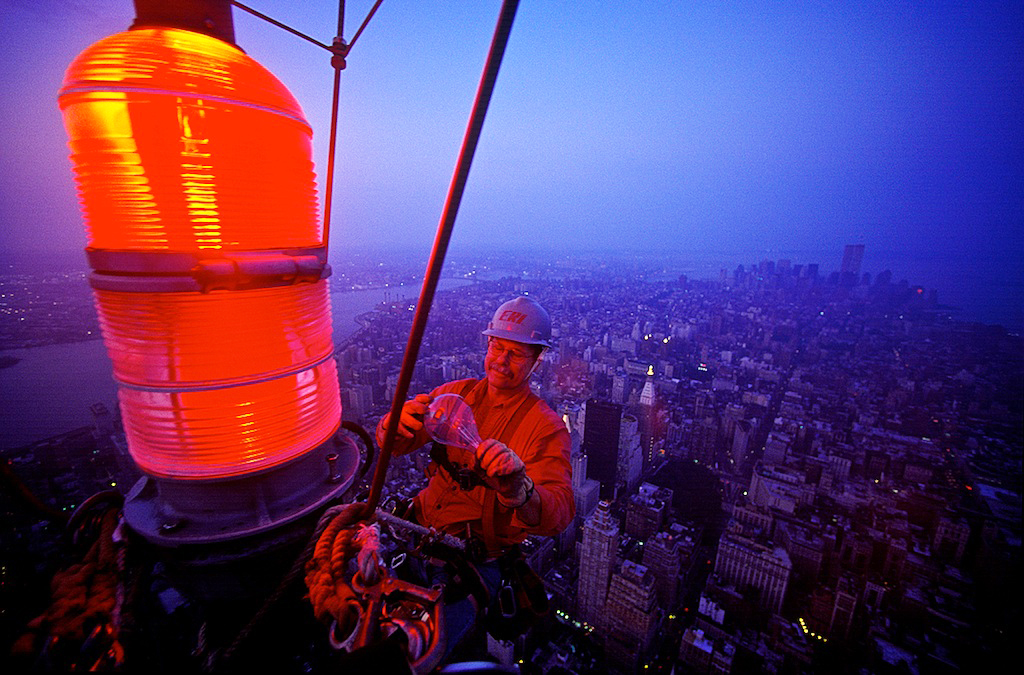 This was one of those jobs. Had the bright idea of putting a different twist on changing a light bulb for a story called “The Power of Light” for the National Geographic. I thought to myself, okay, we can do this. I’ll take a picture of them changing the bulb at the top of the Empire State.  What could go wrong? Well, lots, as it turned out. First climb, I was competing with Ripley’s Believe It or Not television program, believe it or not. They had a chopper floating around out there, and had the notion of wanting to see the light come on and off while Tom was just approaching it on the antenna. Things went haywire with their communications, and, after slogging my way up the antenna to about where I was oh, 15 feet shy of it, the light shut off. I mean I’m hanging there in my harness, and the bulb’s dead. Had to settle for this, and crop the top of the antenna out of the frame. Wasn’t what I came for. Crazy. Bulb’s dead, and there I am, wearing the only light in the joint, my headlamp. Shot from a chopper by a really good photog, Jim Anness, then of the Bergen Record. Sheesh. I was not in shape for that climb. The antenna at that point is like a telephone pole at 1500 feet. It moves around a lot, and has climbing pegs on either side of it. As I came down the pegs, my hand cramped on one of them. Had to reach around the pole and pry my fingers off of it. Otherwise, I might still be up there, kind of french fried, hanging off the side of one of the biggest microwave transmitters in the world. I think they have a power setting on the antenna called “london broil.”

I got my chances up there because of a truly great New Yorker, Alex Smirnoff. Alex was in charge of what they call the mast operations at the building. He was always approachable, and he instinctively knew that the Empire State wasn’t just a building. It’s the centerpiece of NY, an important piece of the history of the city crafted in limestone and granite, and it was built to be photographed. He had a job where the easiest thing, always, would be to say no. But being a gentleman who appreciated the beauty of the building, he said yes. I remember breathlessly trying to give him a rationale for a particular climb, and I heard him chuckling at the other end of the line. “Don’t give me that crap, Joe, you just like to climb stuff,” he said, in his kindly fashion. A great man, who sadly, has passed on.

All this silliness began many moons ago, about the time I came to NY. I was a copyboy at the NY Daily News, a real rube in terms of NY press photography, but I was determined to impress my boss, Eddie Peters, and I requested a loaner of the Nikkor 15mm wide angle, the only one in the department. I was gonna climb the Queensboro Bridge with it, cause they were repainting it. Things were looser back then. I walked onto the bridge, talked the workers, told ’em I was from the News, and started climbing.

This was also a good lesson in what I was worth as a photog. Eddie loaned me the 15mm, a very expensive lens, with considerable doubt in his eyes. This green, untested kid was taking one of the most valuable pieces of glass the newspaper owned. He looked at me, and asked if I would do him a favor. “Sure,” I said. He said, “If you fall, could you find a way to leave the lens behind?” I was off to the races with this climbing thing. Next up, the north tower of the World Trade Center. At that time, no harnesses, no zorbers, none of the sophisticated safety stuff we have now. I had a belt and a rope, and, well, not much in the way of brains. That climb up the tower was a one off, but I did return to the Empire State a number of times. Put Donna Weinbrecht, America’s freestyle skiing champion up there…. And of course, a long time ago, in the middle 80’s, on assignment for Geo magazine to shoot a story on gargoyles, I went up the Chrysler. Little did I know at the time this gargoyle would become like one of those “picture spots,” you know, like they have at Disney, markers telling you if you point your camera this way, a good picture results. This has become, over time, a very popular gargoyle, especially with photogs. Me being me, of course, I am hunched over with a flash meter taped to a monopod, getting the read from the strobes I have on a portico several stories below. There’s that damn “safety” belt again. I tell ya, glad we got harnesses now. If I had fallen with that thing, it would have saved my neck but broken my back.

Got this, available light… And this, later, with flash. I know, I know, the available light is nicer…..oh well. Shows me what good it did to drag Speedotrons up there

Had some funny, stupid stuff up high as well….King Kong on the Empire State… And this one up the old Coke sign at the north end of Times Square. That’s all some sort of lcd, led, computer driven display now. Makes sense. Musta been a bitch changing all these bulbs. The weather breaks like this in New York, and I find myself looking up still…..more tk