A wall is just a wall. But it was intriguing enough to take a second, and even a third look at. Made a quick snap on aperture priority and got a picture, well, of a wall. Looked like a nice color palette but kind of like a coral reef below at about 40′ or so, the color was muted and bluish. (I was a big fan of Jacques Cousteau when I was a kid. Read all his books, and I always remember his early underwater flash photography, and his musings as to why all this magnificent color got stashed in a place where the eye couldn’t see it, except when you hit it with artificial light.)

So there’s the wall. It’s a beautiful backdrop, for free, right there in front of you.

But it is shrouded in open shade–very blue light. This was evident when we put a ballerina in there. 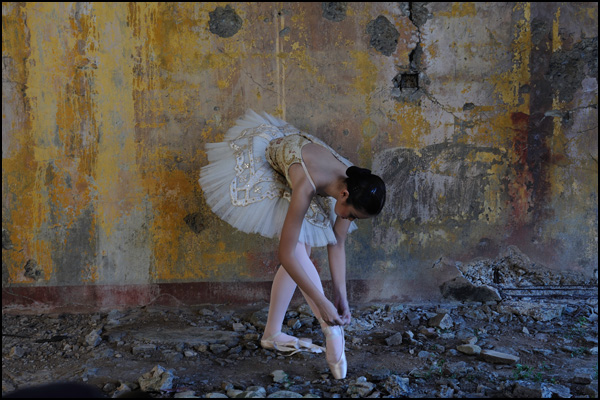 Even the D3 on auto white balance, which crunches Kelvin pretty good, came back with a bluish result. Not a displeasing frame…kinda liked it. But in the old photographic spirit of never leaving well enough alone, I took out the bedsheet I had swiped from my hotel room that morning, some gaffer tape, a couple of small light stands, and 2 SB 800 units on Justin Clamps.

And then proceeded to make a mistake. Not intentional, nor (in this rarest of instances) blatantly stupid, but a mistake nonetheless. I basically connected my light source to my backdrop. The bed sheet is loosely stuck to the actual wall I am shooting, on camera right. This is either going to cause an unwanted, glaring highlight, or, at the very least, produce a reverse gradation of the light. In other words, you generally would want your scene to gradate down in value as you get to the edges of the frame, thus keeping your viewer’s eye corralled. By doing what I am doing here, the light gradates upward in value on the right side, and the eye of the beholder just tumbles out of the photo. As you can see from this snap, I hit the jackpot. Glaring highlight, and reverse gradation. Give that man a cigar! The solution here is very complicated, expensive and not widely used in our industry. It is called, “gaffer tape.” Build a small gobo, or flag, out of gaffer tape, on the wall side of the diffuser dome, and you feather (swivel) the light to the left, i.e., swing the sources so they are pointing into the photograph at a sharp angle to your subject. In other words, they are hardly pointing to the wall at all. What is lighting the wall is spill.

Then the wall gets deep, and rich, and intriguing but not overwhelming. It is just…there, soft and muted, but vibrant and rich. Color wise, it is a far cry from the available light snap made earlier. (Big difference in Kelvin here….flash is running maybe about 5400 degrees, while the shaded daylight in there could have easily been around 7000 degrees, or about the temperature of the interior of your average freezer, at least in terms of color.)

Which is right? Dunno. it’s all to your taste, really. I tend to prefer the warmer version, where the wall comes alive and the ballerina is wrapped in soft, easy light. Bedsheets are great for doing this. They can turn your little flash into a big flash. Add a dash of Capture NX, which is a great tool for the I Suck At Photoshop crowd (bawdy, but hysterical).