Marathon day in NYC is always an amazing day. I’ve off and on covered it for many years. It used to be simpler, back in the day when there were just a few thousand runners winding their way through the boroughs, the bridges and the canyons of the city. In fact, the first time I covered it, for the UPI, I was the only photog they assigned. I went to Brooklyn, walked up to the middle of the Verrazano, shot the runners coming over, got back on the subway, and made it to Central Park in time to make a snap of Bill Rogers crossing the finish line first. I went back to the office on 42nd St., they processed my B&W, made a couple of prints, dropped them on the wire, and gave me my negs back. I believe I got paid $50. Life was indeed simpler then.

The most fun way to cover the marathon is from the air. The spectacle of over 40,000 runners chugging across the Verrazano Bridge is irresistible. It’s a suspension bridge, designed for wheeled vehicles to roll forward in smooth fashion. When all those runners are crossing the span, arms and legs pumping up and down like pistons, and thousands of feet are tromping the tarmac like mini jack hammers, from the air you can see the cables shimmering and quivering.

The above couple of pix were shot with a Fuji 617 pano camera, which is a medium format film camera. It was a trick, loading this puppy while hanging out of the open door of a chopper, to be sure. The leaf shutter was a pretty essential thing as well, as these are roughly 100 speed chrome film, so my shutter speed in the bird is around 1/60th to 1/125th. With a quiet little pfft! of a leaf shutter in the lens, instead of a robust, voluptuous bounce of a giant mirror inside the camera box, I had a prayer of sharpness. Even as I shot them, I knew Geographic wouldn’t use them, as these style of pix need to run really, really big to have impact in print. This race was just a small piece of coverage for an overall story on human performance, and thus not worth a four page gatefold. But that fall day in the air over NY was crystalline, and the breeze was like a big broom that just swept all the usual airborne crap that hovers over the city like a bad, germ laden cough out to sea. So I shot them.

Geographic ran with this. Which was a bit of a trick to shoot as well, as that marvelous, aforementioned breeze was making it tough for the chopper to hover, and hand holding a six hundred in the wind whipped doorway was dicey. You’re framing while bouncing, focusing manually, grinding your teeth, bursting the motor drive, and praying to God you don’t drop anything. You also, in between shots, have to help your pilot out. On marathon day, the Verrazano looks like a beehive, with choppers aplenty buzzing and darting every which way. The pilots have to have eyes in the back of their head, and it’s advisable for you to have the same. Below, is a pullback view, most likely with a 70-200, or perhaps a 300mil. 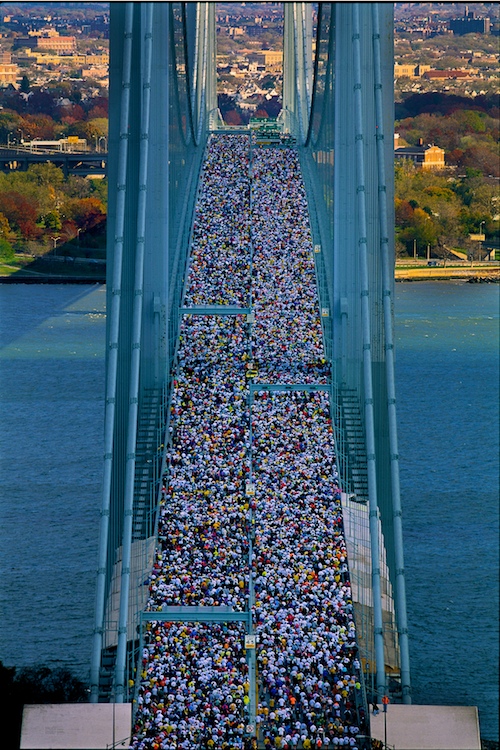 It’s a big day in NY, and a big race. Runners from everywhere are in the city, jogging about, gobbling pasta, getting ready. It is often won by African marathoners, who quite frequently hail from the Rift Valley area of Kenya. I’ve covered them as well, too. Their skills are developed in quite simple ways, in rustic runners’ camps, often running in two’s and three’s, not thousands. Good luck to all in today’s race! More tk….