As we approach, somewhat unbelievably, the 10th Anniversary of 911, I’ll be posting some of the work my studio has done over the years relating to that fateful day. Just postcards and notes, really, from that time of dust and destruction, to now, a time of healing and resurgence. All these updated photos, complementing the Giant Polaroids of Sept/Oct 2001,  have been a project that has taken most of our time this year. They will be on display at the Time Warner Center in NYC, starting August 24th, and running through September 12th. In the days and weeks after the attacks, Father Jordan, who succeeded his fallen friend, Father Mychal Judge, as FDNY Chaplain, ministered to workers at Ground Zero. In a special ceremony, he rode a crane bucket up to where welders had mounted the cross-shaped girder from Tower 1, then blessed the impromptu monument. “We have seen evil at its worst, but goodness at its best. I worked to provide hope and healing–to give comfort to the living and bless the dead.” 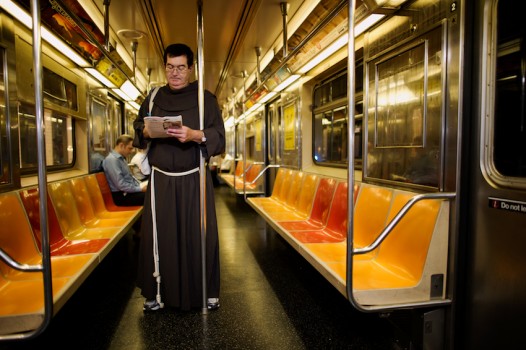 Ten year later, Father Jordan, still a champion of the labor unions, immigrant workers, and the working people of New York City, remains busy. Almost too busy for this photo. I trailed him onto the subway, where, predictably, he was still in his trademark sneakers, moving fast, helping people.