Some folks have written to me about hand holding cameras. I talk about it a bit at workshops and the like. (There’s a page in Clicks about it.) Seems pretty straightforward, I know, but as has been noted before, I have a tremendous capacity to state, explain and generally belabor the obvious, so at the risk of talking about yesterday’s news and telling people that which they already know, here goes.

[By the way, I’m flying right now, back from Spain, and eating on top of my laptop. When I’m working I just close the computer and put the food tray on top of it. Is that weird? I don’t know. Might be risky, I guess, but I do it often. I think I’ll be alright. The tortellini I’m scarfing is encrusted in it’s plastic dish like a bunch of barnacles below the water line of a Greek fishing vessel, and I’m having a hard time prying them outta there with my little plastic fork, so definitely no danger of spillage with these.

Could be trouble with the coffee and the water, I guess, but I’m pretty careful. I don’t think I’ll have an accident, but, just like driving in the snow, ya gotta watch out for the other guy. My neighbor seems nice enough, and not prone to sudden movements, unlike the guy who is sitting in the seat connected to my tray table who’s been trying to get comfortable for about a half an hour now, and the seat’s yakking back and forth like he’s boffing his girlfriend…]

Okay, back to the grip… First, what not to do: 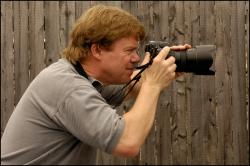 Bad posture, Mr. McNally, as the Sisters of the Precious Blood used to tell me (my blood, not their’s). This type of deal is a one way ticket to the spine doc, and field fatigue. Field fatigue is something we don’t talk about much, but man, it’s there. The more tired you get, the worse your pictures are. The more compact your movements, the more comfortable you are, and the more you support the camera with your body and not just your arms, the more spry you’ll feel, even at the end of the day.

[…But my seat mate’s cool. She’s a slender female, which is great cause I’m hoggin’ the armrest like crazy. Last flight I was next to some guy who literally spilled into my seat and smelled like low tide. Couldn’t even find the frikkin’ arm rest, let alone compete for it.

Armrest comp is great. You get a couple of guys tight together for a few hours, and let the games begin! (This really occurs between guys. Most women tend not get involved in this kind of petty, machismo hoo hah.) I can always tell the ones who’ll be tough. They’re suits, mostly, and they work on PC’s and they immediately pop up a screen with, like, third quarter results, just a spreadsheet stuffed with numbers and bar graphs, and they study it real intently, like they’re a windtalker and trying to crack some kind of code…]

(Warning, warning! This camera grip is much more convenient and doable if you are left eyed and use a motor driven camera, which is obviously deeper, say, than a D70. So we’re talking a D300 with a grip, or a D3, that type of body. Also, the left eye thing. I just have always used my left eye. Dunno why.)

[…Speaking of wind, I shouldn’t complain about anybody sitting next to me, cause I’m tooting like crazy during this flight. Must be the pressure change or something. Or that double beef bean burrito I ate in Madrid before embarking. Oh well, I digress. Brad’s gonna read this blog and make sure he gets his seat on the other side of the aircraft from now on…] An overhand grip might be cool if you throw a baseball for a living, but not if you shoot pictures to conjure bread on the table. That overhand grip! See it all the time. Bad news. The overhand pulls your elbow out, away from your body, like a bat wing, and meanwhile you have that ham hock of a hand laying atop the lens like a couple of pounds of ground chuck. Useless weight on the drag strip. [Flight update….currently there is a baby screaming and a dog barking (no joke), each within five seats of mine. I noticed this lady who got onboard with a little barking rat inside of one of those mesh bags, and sure enough, he’s a yipper…]

Put the left mitt under the lens, or, if truly skinny on shutter speed whilst using a short lens, clap that puppy over your right hand gripping the camera. 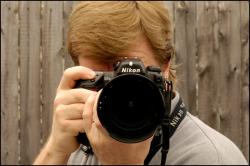 [Flight update….they’re coming by with the duty free cart. All the vices, tax free. Liquor, cigarettes…surprised they’re not running a special on methamphetamine. I was thinking to myself, “Who buys this stuff?” and I got my answer. Guy four rows up just bought what looked to be an incredibly expensive woman’s watch. I know desperation when I see it. Must’ve forgotten to get something for the gf while land based and this is his last chance for something appropriately chic and European. Whew! Dodged a bullet there. If he showed up empty handed he probably wouldn’t get lucky till late fall.]